It’s damp, but not rising damp. 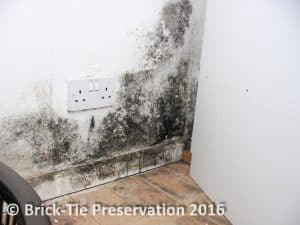 The video here is a walk-around an empty house with damp and mouldy walls. It’s not nice and the mould is unpleasant and ugly. On inspection our surveyor finds damp but it’s not rising damp. It may look like rising damp to an untrained eye. This is because the damp looking stains and the mould are mainly at the bottom of the walls. You could be forgiven for thinking that it must be damp coming up from the ground. That is what rising damp is, but this is not rising damp.

Bryan gives a quick guide on his video. It’s worth watching,  but he tends to knock these things up ‘on the hoof’ so some deeper explanation may be in order, once you’ve managed being so close to that face of his:

There is some rising damp on this post war house (I thought you said it was not rising damp?). Yes we did so let’s just elaborate on that – please bear with us. This house has a cavity walls of brick with old cement mortar. It also has a physical damp proof course in both the inner and outer ‘skins’ of brick. This bitumen based DPC is roughly 50 years old or so. The bitumen material the DPC is made of will still be in a decent condition, there should be no rising damp here. What we do have though, are some secondary consequences of the external skin DPC being bridged. ‘Bridging’ is the term surveyors use instead of ‘bypassed’. It means the same thing. As a result of the high soil levels, combined with the poor state of the gutters and such, parts of the DPC externally are being bridged. This means that the corresponding low level parts of the external leaf (means the same as skin), remain wet for longer than they otherwise would be. They get wetter than they should too, due to the excessive rainwater splash.

Luckily the cavity is not full of mortar droppings (Bryan does not have X-ray vision). If it were so, taking into account that the walls haven’t been excessively disturbed by past work, the internal evidence of damp would be different than it is. The low level courses of brick just above the DPC level would also show the effects of damp rising past them (via the blocked cavity) and evaporating through them for well; 50 years. It wouldn’t be pretty. This would manifest as potential salting of low level bricks; maybe some spalling (blown and lost faces due to freeze/thaw), plus similar internal damage and very high electronic moisture readings.

As it stands the symptoms of the bridging are obvious on the outside of the house and subtle indoors.

Not rising damp but condensation. 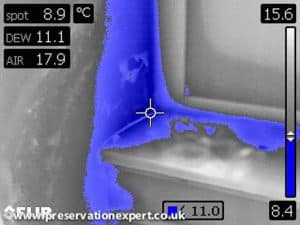 This thermal image shows how the corner in this window opening (a reveal), is colder and condensate is forming.

The most obvious signs of damp inside the house are the black mould stains. These are throughout the ground floor rooms and generally to the North elevation. They are generally at low level, in corners. This is a good diagnostic indicator. Why? The answer lies in thermodynamics but that is for another post. In effect the corners, especially the lower corners, where walls are either external or where an internal wall intersects an external one, are colder than the rest of the walls. Mainly this is due to the way warm air (traveling from your radiators by convection), circulates. It doesn’t really do right angles. The clue is in ‘circulation’. Air is actually a fluid, just like water and gas (air is also a gas). Confused? A fluid can be a liquid or a gas, but gas can’t be a liquid. Think of it just like the stew in a pan on the stove. You stir it to stop it settling and getting burnt. Note that we all have round or oval pans? Where are all the square ones – they’d look funky? They’d be a pain to clean too, because stir as you might, the stew would settle in the corners and get burnt due to lack of circulation. That is because the fluid dynamics of the stew means that it would circulate freely, but tend to miss the corners. In the video you can see as Bryan points out a corner and mentions that this ‘triangle’ of mould is typical of a condensation and high humidity issue. The triangle could be traced with a thermometer and it would be coldest. A thermal image will show this too – but so will mould. Let’s just touch on mould for a moment. It needs water, air and nutrients. Nutrients and air are everywhere. Water is the key and it is to be found in the cooler locations.  It is a little  cooler in all corners and that is the crux.

Now then, this is true of ALL corner in a house heated by convection. But not all houses have mouldy corners. Why is that? The reason is related to water vapour and the way it is supported in the air. Warm air can support lots of water vapour. Cool air less so. Lots less in fact. Relative humidity defines the proportion of water in a given air mass in relation to the maximum it could hold at that temperature.  Thus the Relative humidity in these corners is likely be approaching 100% (perhaps only for very short periods), and probably over 75% or more for longer periods. This is great for mould – essential really. If mould is growing then RH is or has been high. If the RH of the air is at these levels, just because the corner is a few degrees cooler, then the general RH in the rest of the rooms and near the other clean and mould free walls must be over 60% or so. We know this because the RH% of air will rise as it cools, by maybe 4% per degree or so (it varies). In most situations the temperature drop in corners will not be massive, so the rise in RH% can’t be massive. Hence in say, a well ventilated and heated house, the RH% will rise in corners, but will still not reach the RH%’s needed for mould Armageddon.

So the general ambient humidity may be excessive in this case. This is why Bryan looked at the ventilation (which was terrible) and the heating too, which was not that great either.

But you said there was a bit of rising damp? 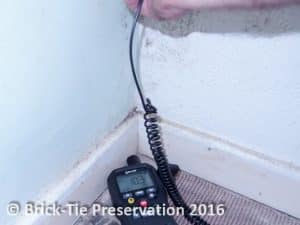 This corner has mould stains but the meter is reading very low. This is due to transient moisture levels, fine for mould and never associated with rising damp

Yes. But only where the DPC was bridged in the external leaf. What effect has this had here? The mould and damp stains were more severe and pronounced in the corner where the external leaf was being wetted (muddy in fact) and the DPC was virtually buried in the soil. This wall is wetter for longer and colder for longer. This compromises the cavity wall insulation, worsening the natural tendency for corners to be cold and making the condensation really bad – even though only the outer skin DPC was physically effected by the bridging.

As in many cases a holistic approach required a bundle of small changes to bring about dry walls.

Of course a new DPC is not required because this is not rising damp. Well it is…… but due to bridging. Un-bridge the DPC and it ‘should’ work. Read the next link if you’ve ever though ‘what is rising damp’

If you need real damp experts to get to the bottom of your rising damp or any other damp problem we have the very best waiting here in Yorkshire. As Bryan demonstrated in the video, often it’s not rising damp, even when it may look like it. – call us on Leeds 265 2752 York 566577 or Sheffield 224 5121 or email us  via our contact page

If the internal skin had been bridged it would be a slightly different matter. This is because as an in-built defect (wicking up moisture for 50 years), the slight rising damp, would inevitably result in a build-up of ground salts in the plaster at low level. This would need to be replaced as part of the internal bridging solution. The solution would involved either cutting out the floor/wall junction to form a new seal or extending the DPC down to meet the screed if the DPC was only bridged by the plaster due to the DPC being a little higher than the screed.. This is intrusive but can be very successful. In view of the disruption it is generally a good idea to install a supplementary chemical DPC in most casee. It’s is just not possible to be sure that the obvious case of bridging is not combined with a defective DPC. This doesn’t matter externally, but if a damp problem persists after the disruptive internal works are complete, then everything needs opening up and fixing again. An economical DPC injection such as DryZone or DryRod is well worth it for added assurance that the mess made, was a one off. Bryan wrote a blog post on this some time ago – see below: 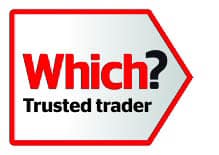 Test us on structural repairs – we do.