This is a question we often get asked, particularly by builders and other tradesmen, who have removed a window or opened up a cavity and found apparently rusty, but thick, strong wall ties; they can’t be blamed for being sceptical that wall tie corrosion isn’t so bad.

To help explain I’ve sketched up an example below (there’s a larger version in the gallery at the bottom of the page too). This shows a typical cavity wall at high level with thick fishtail ties used in its construction.

This is how rusting wall ties cause cracks

This is what happens when thick section wall ties corrode

The fishtail wall ties may be 4mm thick and when the surface begins to rust, the ferric oxide builds up on the surface, so the ties get thicker. Over years this can result in a 5mm thick tie, gradually growing to 15mm thick or more (see the image below). The rusting is usually most severe in the external leaf, where the wall tie gets wet, every time it rains.

Whilst the cavity ties rust at a similar rate; they were probably from the same batch and installed over a short period, this expansion changes that, over time.

That’s beacause original wall ties are usually installed in horizontal rows at say 500mm vertical centres and say, 1 meter apart or so. It follows that those wall ties in the top row, near the gable or eaves, will have much less weight upon them. There is less brick above them, than below. Wall ties installed near the ground will have lots of weight upon them; tonnes in fact.

Eventually the wall ties in the top part of the wall (or other area where there is little weight, such as below windows), will build up enough rust to lift the brick above from the bed joint, causing a hairline crack. This cracking is very fine and usually goes unnoticed, at first. This is when the dynamics of the corrosion change. That’s because the presence of these hairline cracks let more rainwater into the bed-joints where the rusting wall ties are, so that the rate of corrosion speeds up. Over the following few years as much corrosion and expansion can happen, as occurred over the previous 60 years.

Gradually, hairline cracks form further down the wall, as those wall ties lower down build up enough force to lift the weight and so, the expansion cracking marches down the wall.

The effects of the corrosion itself on the strength of the wall depends on several factors, such as the thickness of the wall, the width of the cavity, the exposure and size of building and the number and type of ties installed. However, the main reasons for failure of walls tied with thick fishtail wall ties is not ‘failure’ of the ties, as say a layman or builder would imagine; they rarely snap or buckle. Old ties are oversized and very strong to start with. As a result, old ties can accommodate quite a large reduction in thickness and still be strong enough to support the wall.

The trouble really starts when the ties expand, as the layer of corrosion builds-up.  Wall tie failure then becomes a possibility for these three reasons:

1 – The bond between the wall ties and the wall is broken by the layer of rust, so that the ‘grip’ the ties have in the beds is reduced; it’s as if the wall ties are now wearing gloves; the outer wall can move and leave the ties in place, simply pulling the rusty ‘glove’ out and leaving the wall tie behind (click on the top image for an example of this type of failure).

2 – The expansion transfers loads into the wall. Brick and stone cannot be squashed or bent, it is uncompressible and if pushed at one point, something has to give. This causes the outer leaf to grow and push up on any roof members, sills, lintels, purlin ends, rafter feet and such, which pass through it. The result is resistance as loads from the roof are transferred onto the outer skin – a skin which cannot support the load and which then needs to flex. The flexing usually occurs outward, as a bulging wall, because this is usually the path of least resistance and, wind loadings are often negative; ‘sucking’ at the wall and helping the movement along.

3 – The third effect is the general fracturing of the walls. Walls are constructed from hundreds of bricks or stones, but as they are bonded together they act as an homogenous whole. The splitting of the wall into horizontal panels breaks this uniformity. In addition, resistance to this expansion induced movement happens at internal and external bonded corners. As a result, stepped cracks happen at 45º angles radiating out from the corners. In severe cases, stepped  cracking spreads over the wall surface due to the presence of window openings and any points of resistance such as sills and lintels. The fractured wall is much weaker, despite the fact that the ties are still quite thick and to a layman’s eye ‘not too bad’. 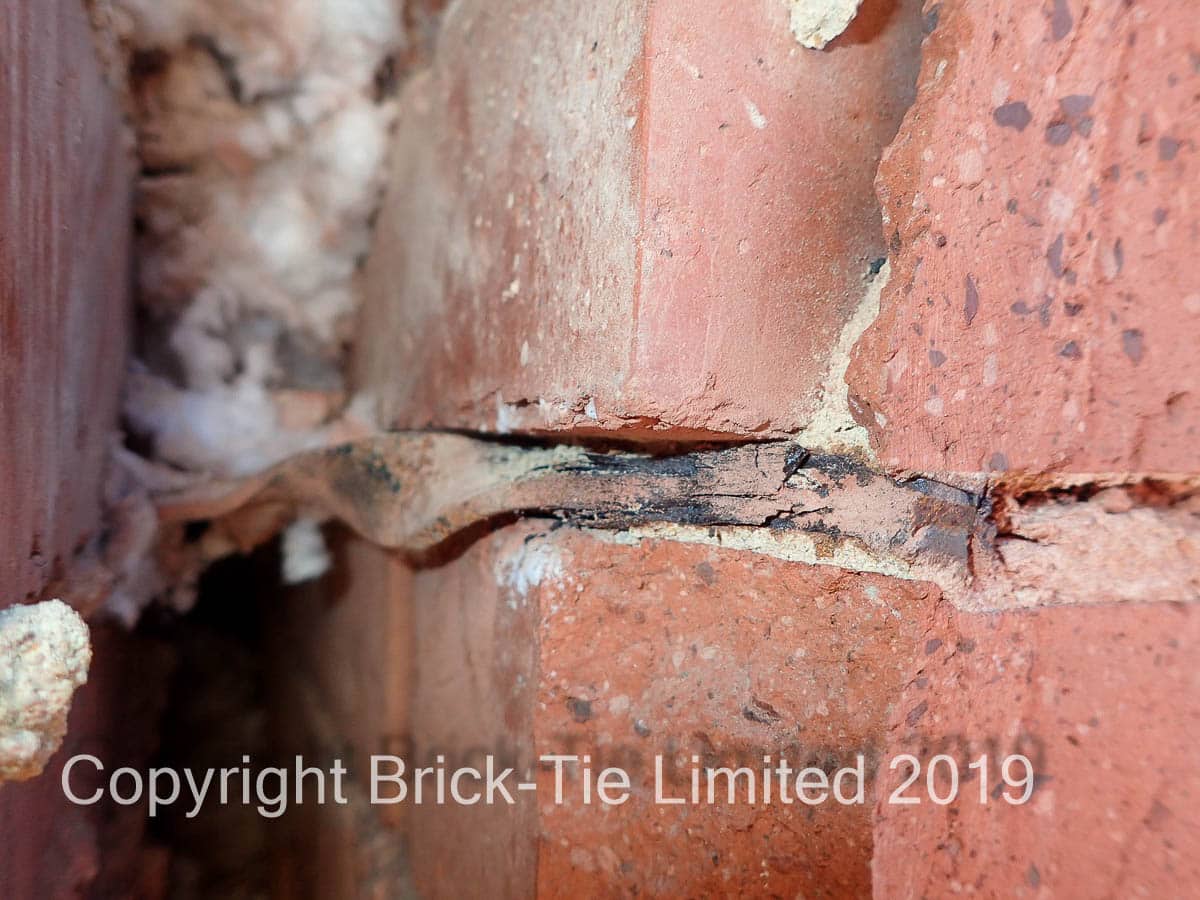 Look how the original metal in the cavity (left) is around 1/3 the thickness of the bed joint. See how the metal gets thicker in the outer leaf? The corrosion products fill and widen the external leaf bed-joint (right).  This is the ‘rusty glove’ mentioned above.

The above is a short explanation of the main points about wall tie corrosion and cracking This applies where traditional thick section mild steel cavity wall ties have been used in the construction. Other types of cavity wall ties, such as galvanised wire ties rarely exhibit significant expansion; however, corrosion in these ties can be an even bigger problem, which I’ll expand on in another post.