When we were asked to call at a Vicarage in Darrington, West Yorkshire, we thought “Here we go; another church to look at – more woodworm to treat.”

However, we found that it was the vicarage with the problem, not the Church – extensive woodworm infestation in the roof timbers. So, what needs to be thought about when woodworm is found?  Is it active? Is it severe or light? Is there any structural damage caused by it? 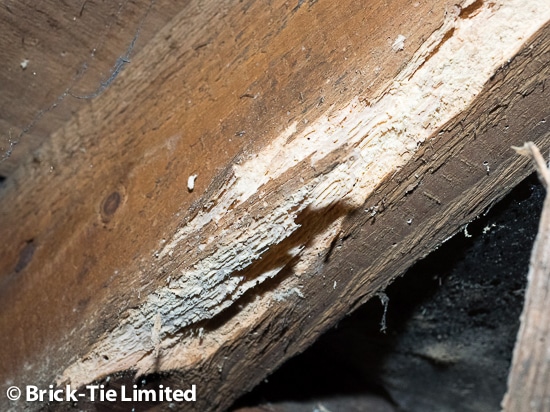 The sapwood was heavily infested by Common Furniture Beetle

The above comes before decisions are made on whether treatment is essential. Then of course other factors have to be born in mind; what type of timber is it? Some are easier to treat than others; which chemicals if any, are appropriate? do we need to balance safety against performance? The treatment must work, but be safe for the occupants and the remedial technicians who work with woodworm every day.

What are the practical obstacles to woodworm treatment work and the legal implications?

Here’s a case where these matters were considered and a woodworm treatment regime specified, which ticked all the boxes. The detached house is a post war property, in the sleepy Village of Darrington, just to the East of Pontefract, West Yorks. Our surveyor identified the roof timbers as probably Scots Pine Pinus sylvestris, which is susceptible to Common Furniture Beetle infestation. The Reverend Judd and his wife had noticed small holes in the roof timbers when storing some articles in the large loft space.

The evidence of woodworm.

On inspection, the exit holes were confirmed as being due to Common Furniture Beetle Anobium punctatum. And what a large number of woodworm holes there were! Further close examination of the rafters, ceiling joists and the sarking boards confirmed that the infestation was active and thriving. The twin methods of flight holes counting, combined with a trusty screwdriver and hammer revealed the extent of the problem. 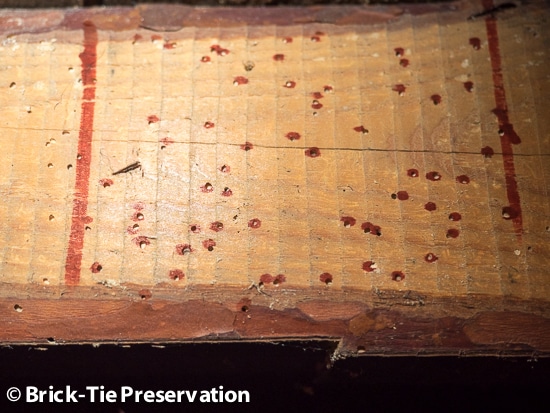 The Building Research Establishment say you can define a severe attack of woodworm if there are more than 20 holes per 100mm run of timber but… there are over 60 here!

This was a severe infestation with up to 63 flight holes per 100mm run of rafter in some places; The Building Research Establishment cite 20 holes per 100mm as cause for concern. All wood has sapwood from the edge of the tree and heartwood in the centre. With pine, the heartwood is actually quite resistant to woodworm. However, the sapwood is very prone – almost a treat for woodworm and not durable at all. 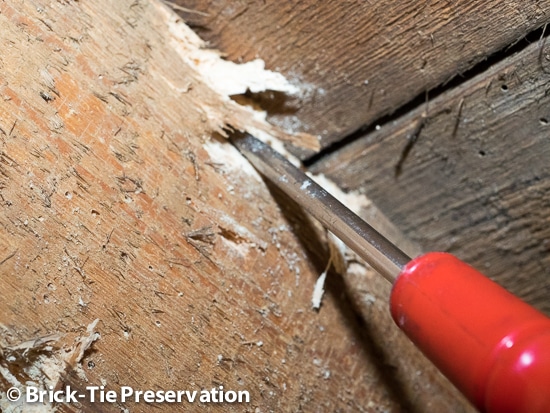 The next task was to identify any structural damage. Our surveyor quickly identified that the timber joist hangers, providing supplementary support to the ceilings were badly damaged and weakened. This is because they were small section and as a result contained a higher than average proportion of the susceptible sapwood. The horizontal timber binders, attached to the ceiling joists were similarly infested and weakened. The extent of damage to the rafters and purlins was a little more difficult to estimate. This was due to the thick layer of heavily infested sapwood, which though virtually destroyed in places, could be cut away to reveal hard and quite sound heartwood. In view of this a decision was made to ‘de-frass’ the rafters. This involves stripping away the heavily worm-eaten outer sapwood, to reveal the depth of the sapwood and calculate the remaining sound section. This also exposes the remaining sounder timber, so that the chosen woodworm treatment can be applied where it?s most needed.

How to treat the woodworm in this case?

Pines are generally permeable and absorb woodworm treatment well. So in this case our preferred option would be Safeguard’s excellent Soluguard product. This is a micro-emulsion, with a safe contact insecticide (permethrin), suspended in a carrier within it. Penetration into dry wood is superb. The contact kill mechanism is also handy, especially in heavy woodworm infestations such as this one. It has impossibly low mammalian toxicity whilst being lethal to Common Furniture Beetle. Non-flammable too and supplied in handy dissolving sachets so there’s no waste to worry about. The control works mainly by killing woodworm ‘on emergence’ so all surfaces have to be treated for this strategy to work.

An electronic moisture meter was used to check the water content of the timbers. Whilst the roof was watertight and the general roof timbers dry, the sarking boards had a variable moisture content ranging up to 23%. The rafters were much dryer, with an average moisture content of only 13%, which can be considered ‘dry’ in a roof void. Sarking boards on top of the rafters on which the roof tiles were fixed, presents a couple of problems: 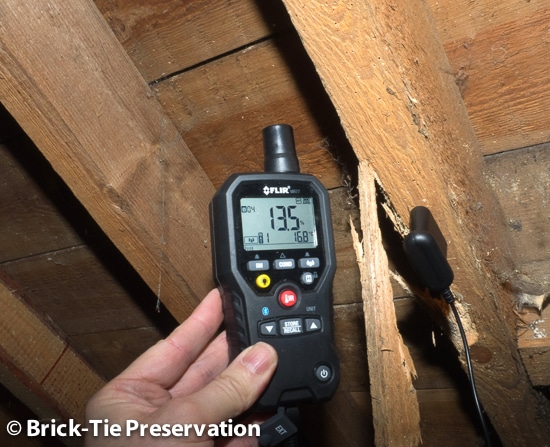 Our surveyors have the qualification, experience and knowledge to draw on when more complex problems arise. In this case treatment would be needed, which would be effective against woodworm and if possible, allow treatment from the underside of the timbers only, leaving the roof tiles in place. It would also be handy if the woodworm treatment had a dual action; killing off the woodworm and protecting the vulnerable and damp sarking boards from fungal attack in the future. Safeguard Europe was turned to once more and we specified that the underside of the sarking boards be treated using Safeguard’s Probor 10. This is a ready mixed Boron based preservative. It has enhanced penetrative ability, particularly in moist timber like the sarking boards. Boron is a very active fungicide with decades of proven success, so we know the timbers won’t rot. It is also a stomach poison for woodworm. It creeps a long way into damp wood, saturating the cells ‘in depth’ and making the wood not only unpalatable to woodworm but actually poisonous too, all with minimal risk to people and animals. 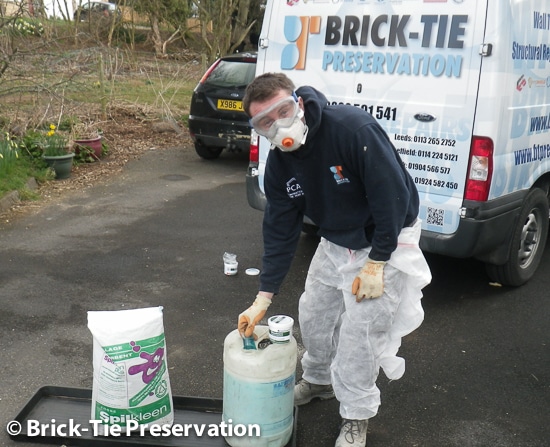 Once the above was considered we look at the safety and health implications. Can the work and risks associated with it be avoided, reduced or controlled? A risk assessment and a detailed safe system of work were prepared. Coshh assessments and detailed information was given to Rev Judd, so he knew what to expect over the few days this all took. Could anything be recycled? What about waste that couldn’t? 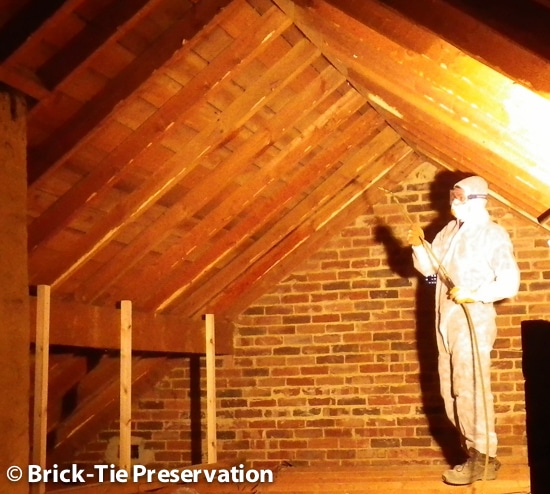 Safe and effective application of Probor 10 woodworm and rot killer

The woodworm infestation in this West Yorkshire vicarage roof had almost destroyed it. The finished project leaves a sound roof, with strengthened hangers and binders and no more woodworm. The sarking boards are treated in depth with dual action woodworm and fungicidal treatment and the whole job is guaranteed and insured against further decay or infestation for 10 years.

For further information about woodworm call any of our surveyors or qualified office staff via your local numbers (see above), or our free national line 0800 591 541

If you’d like to know more about woodworm, see this technical post on how you can tell if woodworm is active or watch one of our videos like this one on active woodworm in Guisley near Leeds

See our staff being trained to PCA standards and passing their PCA qualified technician exams here.