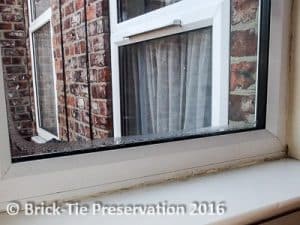 Black mould around the window and condensate on this double glazed glass – why?

Our surveyor Paul Glover CSRT was called in to look at a house in York. “Help” the landlord said “This is a mouldy student let and my tenants are not happy”.

The house forms part of a terrace and is 100 years old. Solid walls, bricked-up chimney stacks and double glazed. It is rented out to students attending York University. The all-girl group of four were having awful problems with mould growth in some of the bedrooms and were worried about their health.

There’s not a lot worse than a mouldy student let. Mould is unsightly and can give off an unpleasant smell – the smell of a damp house is usually due to mould. Something needed to be done but what?

Paul got to work.

He carried out a thorough visual inspection taking in the fact that the walls were solid and not cavity, so tend to be colder. The bricked-up fireplaces, combined with the sealed unit double glazing has reduced air infiltration to a minimum. This is very common. The house has gas central heating. The heating is turned off all day and is turned on only when the students are at home. 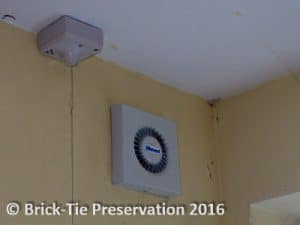 There’s a fan in the bathroom – does it work well?

Mechanical ventilation is vital in these situations, however the bathroom has a small and weak extractor fan. Paul is a bpec qualified, domestic ventilation engineer so he decided to test the fan and find out if it was up to the job. Paul tested the flow rate of the fan, which was 4.5l/s (Litres per second). In fact, the fan should have delivered at least 15l/s to be sufficient and comply with modern building regulations. It should be remembered though, that the building regulations are designed for well insulated modern houses. In a colder, less well insulated house the flow rates should be even better.

In addition, although the bathroom was well lit, the fan was operated by connection to the light switch. Provided a student turns the light on the fan would work (though very slowly). In the daytime and at weekends especially, use of the bathroom would not result in the fan operating enough.

Occupancy and the role of tenants.

With four teenage girl students in occupation, this house will be predisposed to excess humidity. This is because the girls will tend to have their own needs regarding washing and drying of clothes. As an experienced surveyor, Paul knows this; he’s seen houses like this, with clothes drying racks in every room, including the lounge and kitchen – sometimes all in use at the same time. This is not ‘normal’ in a family environment and is just one of the reasons that some students lets have mould and damp problems.

Another feature is a fluctuating heating regime. Students may not heat the house fully, preferring to turn on the radiators, only when they are at home. Cold solid walls take some heating through. As a result, the short bursts of heat don’t last long once the heating is turned off and the walls, which are cold in-depth soon reduce air temperatures, as they greedily absorb the residual heat. This matters because colder air cannot support as much water vapour as warm air. Hence these houses have higher relative humidity, something mould loves. 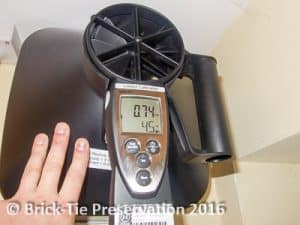 Some use tissue paper to test a fan – not us! UKAS calibrated and a trained operator are needed for accuracy.

Three factors working together to create a mouldy student let; A house with poor ventilation will allow water vapour to build-up to excessive levels. Colder air will be less able to support that water vapour and excess water vapour production, due to the habits of students, is the icing on the cake, for mould – trebles all round!

Let’s get some facts to add to the visual appraisal.

Paul is trained to get good data whenever possible. Measuring air temperature and the relative humidity can help of course. However, this rises and falls along with the external environment. So Paul measured and compared the internal and external conditions. This is useful in assessing whether the issue is likely to be related to excess water vapour production and poor ventilation, rather than only a poor heating regime.

He found that at the time of the survey the differential vapour pressures were 0.6kPa (Kilopascals). This means that the air inside the house contained a great deal more water vapour than the air outside – even in November. One-off ‘snap-shots’ of humidity can be misleading. However, taken with the evidence of his eyes, his experience and the tests he did, Paul now had enough to consider advising his client.

What is possible in a mouldy student let? 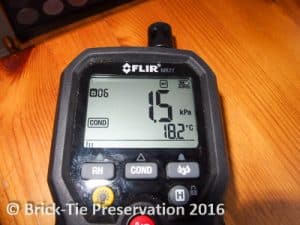 A snap-shot of the internal vapour pressure – 1.5kPa

There are lots of things, which could be done to help this mouldy student let and the landlord:

1.       Reduce water vapour production by stopping all the clothes drying around the house

2.       Raise the temperature in all the rooms, to lower relative humidity

4.       Replace the bathroom fan with a better unit, not dependent on the light switch.

5.       Install a fan in the kitchen and stress that the students should use it.

Experience tells Paul that trying to get the students engaged with water vapour reduction strategies would be difficult. These girls are busy, both at University and maintaining their social life. Expecting them to change their laundry routines and never dry clothes on radiators and clothes racks is well, a gamble.

Energy is expensive so asking the girls to heat the house even when they are not at home, is a non-starter.

Insulating the walls will help, but this is expensive and very disruptive. Resistance can be expected from the landlord and the students, who don’t want the builders in whilst they revise for exams.

Our advice to the landlord 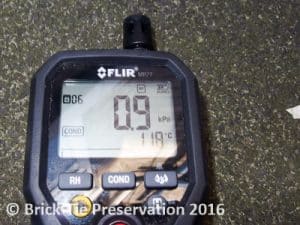 Paul Glover found that the external Vp was 0.9kPa at the time of the survey

Replacing the bathroom fan was a no brainer. Paul chose a Nuaire Cyfan. He specified a constant running fan to give steady background ventilation, drawing dryer air from the habitable bedrooms towards the wet bathroom 24/7. Set at only 6l/s or so, the fan is silent and helps ensure that the water vapour from several hair washing and showering sessions a day doesn’t spread through the house and feed mould. This is further enhanced by the modification we favour in these cases; a boost which is not operated by light switch, but by an infra-red sensor in the bathroom ceiling. This means that every time someone enters the bathroom, the fan boosts to take account of the use. It has a timer-overrun too and works day or night.

Were this a ‘normal’ occupancy Paul would probably have specified a further extract fan in the kitchen. As it happens the students make regular use of the many local fast food venues. The kitchen is used for breakfast and the odd party. It is not a normal situation and excessive water vapour production must be assumed to continue. Paul specified a Nuaire Drymaster Positive Input Ventilation Unit instead.

This was specified to provide ‘whole house ventilation’ so that the system needs no intervention from the students and will improve the air quality throughout the house. This system pulls in air from the loft space. This air is usually a few degrees warmer than the air outside a house. It is also much dryer than the air inside the house. The air is filtered first and the dry, pre-warmed air is gently introduced via a diffuser in the landing ceiling.

Paul explained that is would lower the differential vapour pressures so that the house would no longer be a ‘wet occupancy’. “Will it really?” asked the landlord.

Paul assured her that that we can use state of the art data logging to check the effects of the new ventilation system. He installed the data loggers inside and outside the house for several weeks before the planned ventilation upgrade. Our electrician installed the fans after Christmas and Paul attended to the commissioning of the units in accordance with approved document F (means of ventilation), of the building regulations. The data logging equipment was left in place into February, before the downloaded to our server. Over 6000 data points were included – this was the same at Paul standing inside and outside the house for two months measuring the parameters every half-hour!

The results were spectacular.

What this means is the property was what is known as a ‘wet occupancy’. Mould loves conditions over RH75% and the point at which the air would be saturated and cause condensate to form was only three degrees below the average air temperature – that means that whenever air temperature fell just a few degrees’ condensate formed. Not good and a mouldy student let.

No longer a mouldy student let.

After installation and commissioning the Cyfan and the Drymaster the data confirmed:

If you are not keen on figures look at the graph Paul produced to illustrate his findings. He has used colour to highlight the ‘before and after’ data. As the graph shows the RH fell and gap between the dew point and air temperature grew wider –  a very good thing. This happened despite the fact that the house was colder due to the inclement weather. Normally a colder house would result in a higher RH% – not now. If you look carefully you can see that the students went home at Christmas – hence a static RH even though the heating was off – this is the power of data. 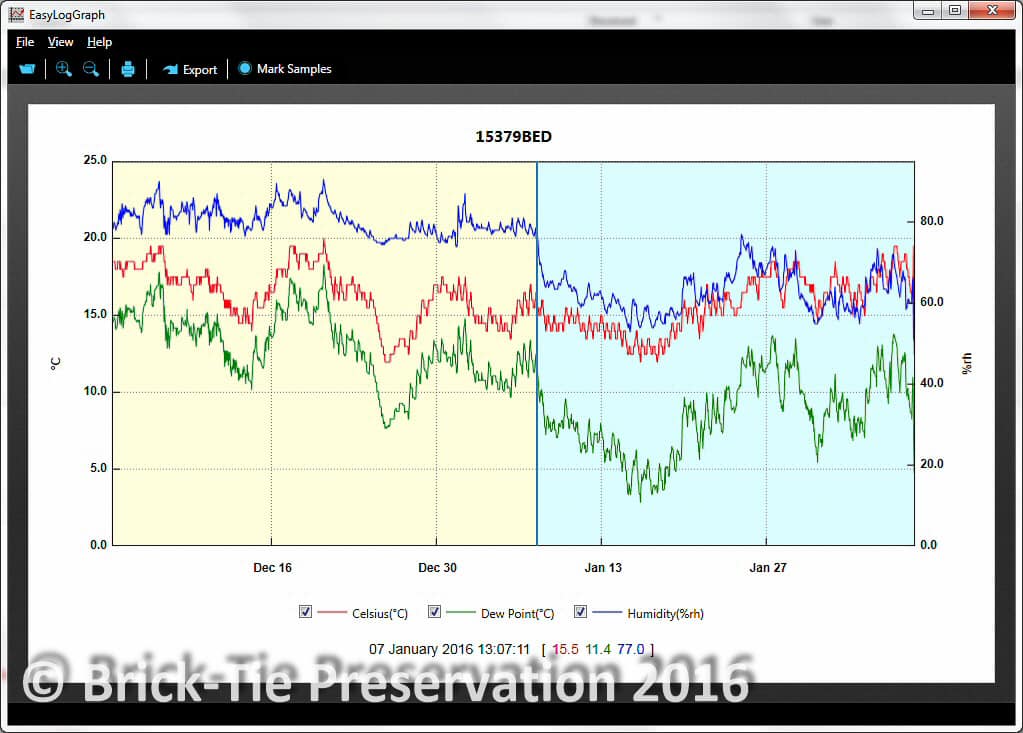 This is the power of data. Over 6000 separate measurements before and after the whole house ventilation system was commissioned.

Paul has received feedback from the landlord and the tenants – they are delighted and the house is mould free.

Our investment in training, staff development and state of the art equipment brings a scientific level of damp diagnosis, which is unique in Yorkshire. This means we can tailor solutions for our clients, which work. They work because we always treat every home and those living in it as individuals. There is no ‘one size fits all’ with Brick-Tie Preservations.

Want to know more about mould and condensation? Try some of our guides and our Knowledge base

Why is my house mouldy?