A very mature damp problem, combined with cement pointing had caused so much damage 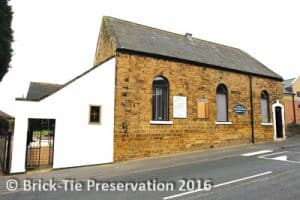 Woodlesford Methodist church serves the community well. However, when dampness to the external walls seemed to just get worse and worse, they called in an Architect to have a look. Russell Trudgon of Arctic Associates found long standing dampness, bulging walls and hard cement pointing on top of the old lime pointing.

The damp manifested as stains and salting walls, particularly on the westerly facing gable. There were old dado rails and match boarding on the wall too and these were decayed and smelly (it appears these were an old fashioned way of ‘damp proofing’). The damp was worst along the base of the wall, where there was a corresponding salt band and damp patch visible outside.

The gable also overlooks a school playground and it was bulging too. Boroscope inspection revealed that the rubble fill had large voids in it (There was evidence that some birds had been nesting in the voids). Attempts had been made to point the wall, but hard cement had been used rather than lime pointing. The cement was trapping rainwater in the beds and stones and there were clear signs of erosion and heavy salting. Drainage at the base of the wall had been improved, but the playground was higher than the chapel floor. There was some penetrating damp, as well as rising damp at the base of the wall. 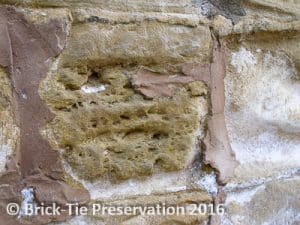 Past repairs with hard cement had to be carefully removed.

We discussed the options with the clients Architect and the minister. A plan was agreed to solve the internal cosmetic issue of damp walls and stains, whilst protecting the gable and other walls from further damage.

The work involved entering and working in a primary school playground. We liaised with the headmaster and carried out a detailed risk assessment. Clearly with children around we had to take their health, safety and well-being into account. A plan was hatched, including sufficient supervision, fencing and consultation with all concerned, before any work could begin. With a safe system of work in place, Russell gave the go-ahead. 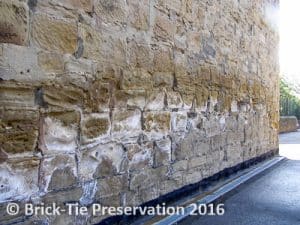 Tired, cold, damp and bulging – with a cement face pack!

We have the relevant skills to use traditional lime mortar; lime pointing is a speciality. However, this building also needed some additional help to cope with the gable’s weakness and susceptibility to penetrating damp. The aim of the work was:

Our specification for repair. 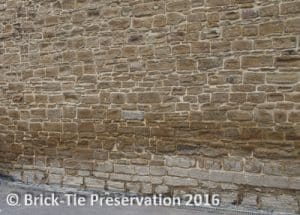 Free to dry out at last, with soft permeable lime pointing by Brick-Tie Preservation – structurally repaired too

All of the hard cement pointing was carefully removed by hand using chisels, not grinders. The gable wall received a number of Cintec grouted sock anchors to bond the inner and outer skins of stone together for good. These were installed in holes drilled at the junction of the perpendicular bed-joints, so that the surface of the wall wasn’t blemished. The sock anchors are ideal for soft and uneven substrate. With a stainless steel body and virtually no expansive force on inflation, they were the perfect wall tie for the job.

Then our technicians used a natural lime and fine sand grout to carefully fill the large voids in the wall. The grout was injected by gravity only, at 500mm heads from the bottom up. The grout is permeable and soft, so it replaces the action of the settled rubble, without trapping moisture in the body of the very damp wall.

Lime pointing was then applied to the deeply raked beds. The lime on the western wall was a feebly hydraulic NHL 1.5,  to improve weather resistance (and resist the footballs kicked against it all day – the little blighters). External work was finished by cleaning out the existing surface water drains, gutters and down-pipes. 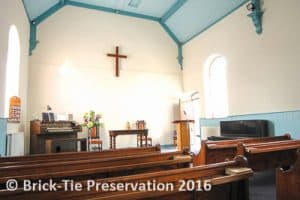 Fast decoration and ready for use – A combination of traditional skill, modern materials and a flexible approach

Internally the plaster was removed. It was saturated and very salty. The school playground slopes towards the wall and it was clear the wall would always tend to be damp at the base. The playground is occasionally gritted, so hygroscopic chlorides were likely. Thus a cosmetic repair was found most suitable. It was important that the suspended timber floor was protected too – damp wood rots! Additional sub-floor ventilation was installed. The floor was cut back and repaired. The dados and matchboards were removed. Then an Oldroyd XV membrane was applied from below floor level to well above the height of the staining. There was and is no direct water seepage into the building. In effect the membrane is not acting as a waterproofing layer It’s role is merely as an isolation layer, to protect the internal finishes from contact with the damp substrate. The use of the Oldroyd membrane system had the additional and desirable advantage of reducing the drying out time, by avoiding thick layers of new plaster. The minister and his flock needed their chapel back double-quick.

Finally, internal plastering and joinery could be completed. Leaving the chapel ready for immediate decoration and re-use. We were commended by the Minsiter, The Architect and the adjacent Headmistress, for the way we designed, applied and administered the work. 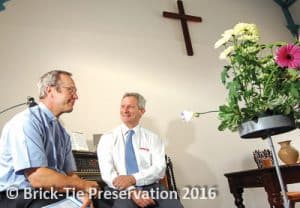 This case study is included to illustrate how traditional and modern repair methods can be successful on traditional buildings. There are those who tend to decry the use of any modern material on old buildings. This may be a justifiable stance. For grade 1 listed buildings and structures of historic interest we’d tend to agree (most of the time). However, is this always practical where homeowners and building users need fast and effective results? It does sometimes pay to consider all options. Modern materials are not in themselves evil. Lime pointing is great – cement pointing can be fine -but never on old or ‘soft’ materials. Cement can also cause permanent damage and our MD has written on why lime based pointing is best for old buildings.

Moisture evaporates from any material above freezing point. Walls will dry out and most of that drying occurs at the external surface. In comparison, very little evaporates internally. This is especially true in old buildings, which have been ‘modernised’. By this we mean occupied by ‘modern families’. Families with showers, toasters, washing machines and, no open fires. These houses have a high level of humidity, which reduced evaporation internally. Thus the effects of applying a damp proof membrane internally, are insignificant when it comes to walls drying out. They will dry out to the external face. This is true of the case study above, where the pointing has been restored to it’s soft and permeable former glory.

For sympathetic lime pointing, combined with a flexible and customer focused attitude, call us now Leeds 265 2752 York 566577 or Sheffield 224 5121 or email us  via our contact page

Want to know how to care best for historic and traditional buildings? Our MD Bryan Hindle loves the SPAB web site and if you love old buildings you will too – SPAB