Unwelcome visitors in the Vicarage roof!

An idyllic village in rural Yorkshire, with a vicar suddenly in the market for effective woodworm treatment. The vicarage is a large detached house built in the mid 1960’s. Quite a young house to be harbouring an army of woodworms, or so you’d think.

The Yorkshire diocese surveyors carried out a regular quinquennial survey of the Church and the vicarage. The old church was found to be in great condition, but a surprise was in store when the surveyor entered the vicarage roof.

Calls were made and one of our surveyors attended to carry out a thorough timber survey. The roof was found to be severely infested by a well established infestation of The Common Furniture Beetle Anobium punctatum. Apparently, effective woodworm treatment was urgently needed. However, first it was necessary to find out whether the infestation was active and how much damage had been done. 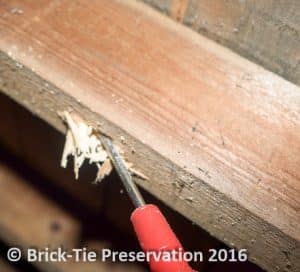 A screwdriver is essential on a woodworm inspection

The loft insulation was lifted to check the condition of the ceiling joists. This also exposed the back of the plasterboard ceiling. There were woodworm holes in virtually all of the roof members; rafters, ceiling joists, purlins and the timber sarking boards. The infestation looked quite bad and a quick calculation revealed that there were well over 80 woodworm flight holes for every 100mm run of timber – that is considered a significant infestation by the BRE (Building research Establishment) no less.

The ceilings seemed to ‘flex’ underfoot as they were walked upon. There were a number of cracks visible in the ceilings when viewed from the bedrooms. Whilst the woodworm infestation was ‘heavy’, probing with a screwdriver revealed that in fact the heartwood was almost untouched. There was still lots of strength left in the roof members – so why the flex?

Woodworm loves the parts of the timber which were ‘freshest’ when the timber was felled in the forest and converted. This is called the sapwood. It’s rich in nutrients and it contains less of the toxic ‘extractives’ which trees store in their heartwood. The proportion of sapwood is usually greater in small section timber. This was the case in the vicarage roof.

Our surveyor noted that the ceilings were gaining support via small section joist ‘hangers’ fixed to binders, which ran the full length of the roof. These allow the strength of a sturdy roof to be ‘borrowed’ by a ceiling. The ceiling is in effect ‘hanging’ by them. These hangers were very small section, which is fine because timber is quite strong in tension (pulling and stretching). 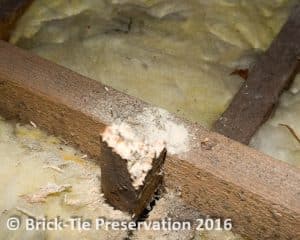 The timber hangers were so badly infested they could be snapped off by hand.

However, as mentioned, small section timbers are often rich in sapwood and so it was. The woodworm had enjoyed a field day and consumed so much of the sapwood that the hangers were failing at the fixing positions (where stress in concentrated by restraint). The binders were very wormy too.

Effective woodworm treatment would need a replacement hanger and binder system for sure. We then probed the rest of the roof to find any unsound timbers. Lost of very friable sapwood was found, but fortunately the roof was in good structural condition. The timber sarking boards were damp though. This is common because they can attract condensate, which happens on the underside of the roof tiles and simply soakes into the wood. Woodworm loves damp wood – it evolved in woods to infest it. The usual post-war construction is slate laths, which leave more tile exposed, so that evaporation of any condensate happens quickly (they are cheaper than sarking boards too). The advent of sarking felt also changed things for the better, as the laths are on the dry-side of the felt. Excess condensate can evaporate externally or run down into the gutter. The sarking boards needed treating but, how to treat them fully, when the upper side was covered by tiles? 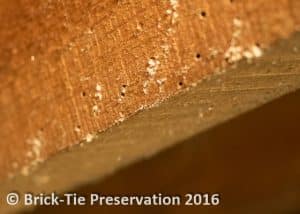 The extent of repair was clear, but what about woodworm activity? the Control of Substances Hazardous the Health regulations (COSHH), 2002 preclude use of any pesticide without justification. Was the woodworm active? The survey was done outside the flight season, so no visible activity was found. Was treatment justified in this case?

Close inspection clearly demonstrated recent activity; the insulation was full of dead common furniture beetle carcasses. They were strewn on the families belongings stored in the loft too. There was fresh frass (woodworm droppings), under recent looking flight holes, in the sides of joists and ejected from the sarking boards. How recent? This is hard to say because roof spaces are not disturbed very often. Some experience is needed and from a surveyors perspective, having seen lots of ‘old’ and inactive flight holes, these looked pretty fresh. 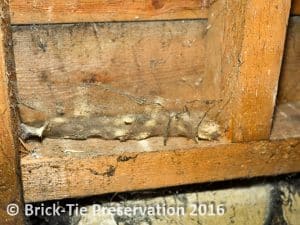 These cobwebs are not that old, yet the emergence of adult woodworms from the timber above has left evidence.

Could the roof be monitored, to wait for activity to be sure that treatment was needed? Yes this was considered. However, the remaining evidence had to be included to get a full picture: 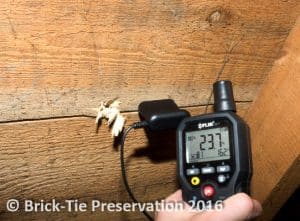 The moisture content of the sarking boards was higher than that in the roof timbers generally.

These practical matters, taken with the apparent recent activity resulted in a firm recommendation. The roof receive was to receive effective woodworm treatment concurrent with the hanger and binder repairs. Once a decision to carry out repairs and effective woodworm treatment was made – we planned and organised the work. A risk assessment was carried out. A safe system of work was agreed – work commenced.

The above outlines some of the processes we go through before taking a decision to use any chemicals in any property – residential or commercial.

Protection for the hallway and upper landing was installed, the occupiers were briefed in detail and we could begin treatment. The stored articles and all of the lost insulation was removed, to avoid chemical contamination and to expose all of the roof timbers. De-frassing is a term used to describe the removal of the soft and worm-eaten sapwood from infested timbers. This was done prior to the treatment. It was necessary in this case, as a method of revealing any localised areas where the loss of section was significant. It also removes the softest and weakest wood. The wood, which is already useless to the roof. Sound sapwood is left in position as it does still contribute to the strength of the timbers.

The old hangers and binders were carefully removed and new items installed, pre-treated against woodworm and rot. In choosing an effective timber treatment fluid we considered the species of timber – in this case Scots Pine Pinus sylvestris, a common softwood, which absorbs timber treatment fluid very well… good. 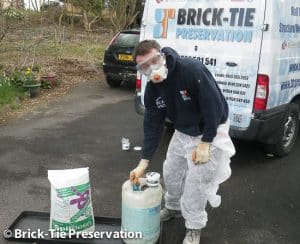 The main roof timbers and the smaller sections were sprayed twice using a micro-emulsion type woodworm fluid via our suppliers Safeguard Europe. Treatment to the sarking boards was modified to use a dual action preservative. The chosen product offering the advantage of deep penetration into moist wood and a fungicidal action, with effective protection against woodworm. Safeguard’s ProBor 10 was a perfect choice for this. This is a professional treatment based on boron. It is carried in a hygroscopic fluid and creeps through damp wood, leaving the boron embedded in the timbers’ cells,  to kill both woodworm and wood destroying fungi. The material allowed us to treat the 20mm thick sarking boards from one side only – saving the otherwise considerable expense of removing a vast number of roof tiles.

On satisfactory completion of the project we issued a 10 year written guarantee for all of the roof timbers. This is also insured for the full guarantee period so that the diocese and the Vicar, can relax.

We hope you will agree that in the above case everything possible was done to identify the problem, place it in context, agree a safe and effective woodworm treatment and do that safely. If you have a timber infestation worry call us for friendly and honest advice on  Leeds 265 2752 York 566577 or Sheffield 224 5121 or email us  via our contact page

For more information on woodworm or our other services, please browse our site. In addition we have inserted some links below to relevant articles. Why not try our video gallery where you can watch us looking closely at woodworm issues?